Ribeye Meal for under $6 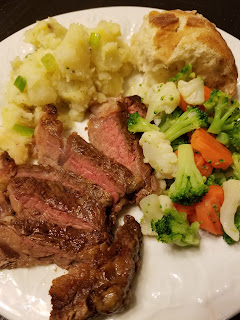 For health and budget reasons, I don't think you should eat steak every night, but sometimes it just sounds delicious! As I've droned on about before, Americans eat WAY too much meat. Health recommendations are usually around 3 ounces per meal (and some groups say only 2-4 ounces per day.) Here is what I recommend instead of going out to a restaurant.

To eat this at:
Fancy steakhouse, at least $30
Mid range steakhouse about $20
Low price/quality restaurant minimum of $15
(Plus you would need to add any beverages and gratuity)

I bought two ribeyes for $18.50 which totaled 1.97 pounds. This is just about average from any grocery store. You can get a nice cut of meat for around $9/pound pretty regularly. (We actually got about 6 servings, but for the restaurant comparison, I went with 4.)

12-16 ounce bags of frozen California blend vegetables are always about $1.

A package of green onions has about 12 stalks for $.89, I used one for the potatoes.

I also used Janes Krazy Salt, 4 cloves of garlic, about 4 ounces of olive oil, and some salt and pepper. which is a total of about $1.15

Making the meal is pretty easy, just dice and boil 4 potatoes until they are pretty soft, but not mushy. Drain and add 3-4 cloves of garlic, 3-4 ounces of olive oil, and seasonings to taste.

Preheat oven to 400* Generously salt both sides of the steak and let them come to room temperature. Lightly oil both sides. In a very hot cast iron skillet sear the steaks on each side for about 3 minutes then put whole skillet in oven until it is your desired level of doneness (about 8 minutes depending on thickness.)

You could make a sauce for the steak, but I don't think it is at all necessary. You could do anything from a simple deglazing of the pan with a flavorful liquid to a bleu cheese sauce to a sauteed mushroom and onion topping and it wouldn't add more than $1 per serving.

The vegetables were steamed in the bag and tossed with a bit of olive oil and Janes Krazy Salt (my all time favorite seasoning!)

The bread was thrown in the oven along with the steaks to crisp the outside and warm it.

Option 1: Place the beans in a large bowl or pot and cover with water by 2 inches. Let soak for 8 hours or overnight. Drain and set aside.

Option 2: Put the beans covered with water or chicken stock by 2 inches in the crock pot on low or covered pot on the stove set to low for 2-3 hours (add a couple of bay leaves if desired) before starting the rest of the recipe.

Put the seasonings, beans, and liquid in a crock pot on high until you reach a simmer. Reduce the heat to low, stirring occasionally, until the beans are tender and starting to thicken, about 2 hours.

Mash about 1/2 of the beans against the side of pot with back of a heavy spoon, stick blender, or blender. (Skip this step or only slightly mash if you want more of a soup consistency.)

Continue to cook until the beans are tender and creamy, about 2 hours (or as long as you want, I sometimes cook up to 4 hours on low and then leave on warm overnight.)

Add milk or water if a thinner consistency is desired.

*I use homemade chicken stock that is flavorful but doesn’t have a lot of salt, so I use more of the Krazy salt than if you used store bought stock, which is typically saltier and less of the poultry seasoning because it is already in my stock. If you are using water, then adding bouillon cubes when you add the rest of the seasonings will give a more chicken-y flavor.

*This can also be done on a stove top or Instant Pot with modifications.

*As long as you are cooking the chili for at least 2 hours on low or 1 hour on high you can add uncooked chicken cut into very small pieces.

One is presentable the other a bit ugly, but they both are oh, so good! The brownie is a pretty basic cocoa-based brownie recipe and it is dense and moist, but still fluffy enough and with a very slightly chewy crispy top.

Most recipes use all regular sugar and add vanilla in the wet ingredients.  I am trying to make a recipe that is as easy as possible to make from a dry mix and having to add three ingredients seems like too many. To counter the loss of the vanilla, I used half brown sugar which adds a lovely molasses flavor and also makes it moister. If you use all brown sugar, the top layer won't get that slightly different texture that I really want from a brownie (if all you have is one or the other, you will still end up with a delicious treat!) I'm also toying with the idea of using shortening in the mix so that egg is the only wet ingredient, but wonder about how that will affect the shelf-stability, so for now am sticking with this.

Mix all of the dry ingredients together. Add the wet ingredients. Bake in 350*oven for 25-35 minutes or until a toothpick in the middle comes out with only a few crumbs. 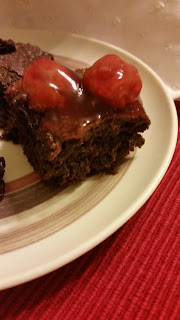 That was the pretty version - for an ooey, gooey, doesn't come out of the pan easily treat just switch up the recipe a little! Put the pie filling in the bottom of the pan, use one egg instead of two and add 2 tablespoons of water then pour the batter on top of the cherries.

This is also super to keep in the pantry for a quick dessert. Below is for 4 batches, but you can do as many as you would like! When you're ready to bake, just measure 2 cups of dry mix to make one batch or adjust to whatever size you feel like eating! Ex: 1 cup mix, 1 egg, 1/4 cup oil for a few muffins or 3 cups mix, 3 eggs, 3/4 cup oil for a 9x13 pan


I've been on a bit of a quinoa kick lately and this is today's offering.

Lucille and the neighbor kids picked a large amount of parsley from the yard and so, of course, I thought about tabbouleh but didn't feel like digging in the deep freeze to find the bulghur and all of my mint died :-( so my tabbouleh-inspired salad was born. 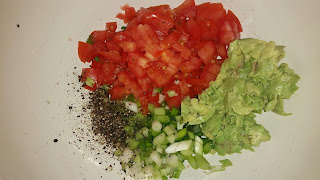 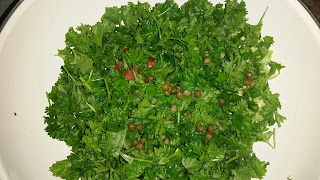 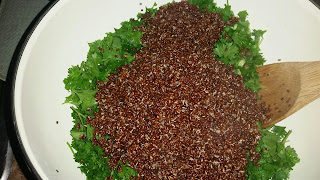 3 cups cooked quinoa (made from1 cup of dry) 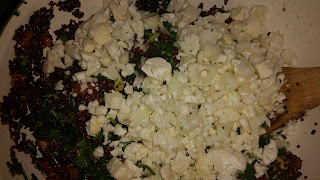 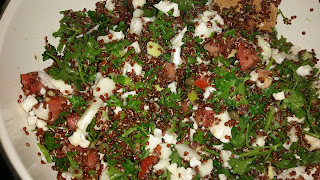 Email ThisBlogThis!Share to TwitterShare to FacebookShare to Pinterest
Labels: recipes

Not Texan, But Still Good CHILI (and a vegetarian version)

Easy Vegetarian Chili
Posted by Kolbi at 12:38 PM No comments:

Email ThisBlogThis!Share to TwitterShare to FacebookShare to Pinterest
Labels: recipes